The following Paul Graham tweet has been making the rounds recently: 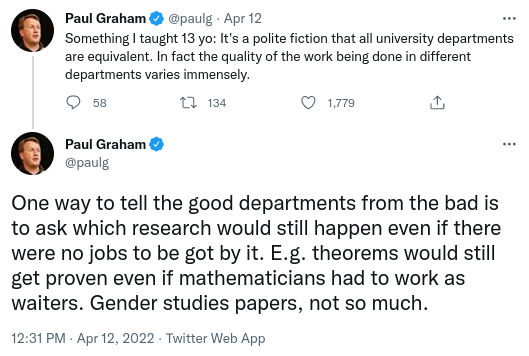 Unsurprisingly, I think this tweet is wrong. Moreover, I think it’s laughably wrong, but not in quite the same way everyone else seems to. The general thrust of the dunks has been “has Paul Graham ever met a mathematician?” Well, I have met mathematicians, and I think Graham is basically right about them. Sure, if a single mathematician can’t get a research job, they might stop proving theorems and find other vaguely-technical work—think of a mathematician or physicist you know who didn’t get a job in academia. But if no one were proving new theorems, I would be shocked if hobbyists didn’t take up the mantle. The progress of the field would suffer massively (though more on the theory-building side than the problem-solving one), but it wouldn’t stop. Graham’s error is in thinking the same isn’t true of gender studies.

With that out of the way, there are several more things I could say about this tweet:

I could point out the abysmal state of the faculty job market in the humanities—certainly worse than in math—which ensures that roughly zero people go into gender studies because there are “jobs to be got by it.”

I could suggest that framing gender studies scholars as cynical rent-seekers reflects an internalization of right-wing culture war narratives (corporate diversity consultants are another matter, but the tweet is about academics).

I could bring up 2010s Tumblr culture, which is proof that people will devote staggering amounts of their spare time to debating the ontology of gender.

I could point out the well-established fact that Paul Graham reads Slate Star Codex, so he should know better than to make this argument. Say what you will about Scott Alexander, but you can’t deny he’s written many essays—including some extremely good ones—that fall under “gender studies.”

I could point out how this is at odds with the standard techie critique of humanities majors—that they’re stuck in a state of arrested development, “majoring in a hobby,” and need to realize that life isn’t all fun-and-games and learn some valuable skills.

And lastly, I could argue that Graham, having amassed millions of dollars and established a loyal internet following, is has become too insulated from the consequences of his ideas. That he just farts out half-baked and inconsistent statements that anyone (including Graham himself!) could debunk with 30 seconds of thought. This reading would be well-received by many people, would get me a lot of likes on social media, and would be promptly forgotten after everyone scrolls past it. Regarding authorial intent, it might even be correct.

But I there’s a better, more artful, more uplifting reading of this tweet—one which paints a very different picture of Graham’s actual thoughts on gender studies. To understand why, we need to talk about Leo Strauss.

Strauss was a German-American political theorist who taught at UChicago in the 50s. Today, he’s primarily known for two things: his work on “esoteric writing,” and an academic genealogy with more conservative intellectuals than a Bozell–Buckley family reunion. The latter will have to wait for another time (oh man, will we get to the Straussians), but for now I’d like to discuss esotericism. Strauss was interested in writers living under oppressive regimes that would subject them to ostracism, censorship, or violence if they expressed their ideas outright. According to Strauss, such writers often crafted texts with an exoteric meaning—a banal thesis chosen to maintain plausible deniability—and a more controversial esoteric meaning, which is never stated explicitly, but hidden between the lines for attentive readers.

There are several ways to accomplish this goal. An esoteric writer might make an obviously bad argument for their stated thesis. They might frame their piece as a refutation of heresies, but state the heresies with lively, passionate prose and cutting arguments, before retreating to a dull and pedantic style for the refutation. They might fail to make a refutation at all, ending bluntly with “but this goes against the wisdom of the church and must therefore be wrong.”

This all reminds me of an old SNL sketch, in which Steve Martin plays a medieval barber. From 5:39 in the linked video:

Wait a minute. Perhaps she’s right. Perhaps I’ve been wrong to blindly follow the medical traditions and superstitions of past centuries. Maybe we barbers should test these assumptions analytically, through experimentation and a “scientific method.” Maybe this scientific method could be extended to other fields of learning: the natural sciences, art, architecture, navigation. Perhaps I could lead the way to a new age, an age of rebirth, a Renaissance!

An esoteric reading of Paul Graham’s tweet requires two things: a concealed argument, and a reason to conceal it.

The first is obvious. Graham stakes out an exoteric thesis: that math and related fields are “better” than gender studies. He defends it by establishing a criterion for the quality of a field (whether amateurs would care enough to produce new work), and stating by fiat that it applies more to math than gender studies. But any reader—crucially, even one who agrees with Graham’s exoteric thesis—would concede, if they thought about it for a moment, that the criterion is at least as true of gender studies as it is of math. And it’s certainly more true of gender studies than applied fields like software engineering!

So Graham’s esoteric thesis must be that gender studies, and the critical humanities in general, are more socially valuable than his own discipline.

Why would Graham want to conceal this point? Certainly he’s not afraid of Twitter censoring a defense of gender studies. I think there are a couple possible answers. First, he might assume many of his followers won’t be sympathetic to such a defense, and wants to prevent them from dismissing it out of hand. Second, he might want to conserve his social capital in the tech world, as any explicit praise for gender studies would brand him a social justice warrior in they eyes of his VC friends. Esoteric tweeting allows him to make his case to a learned few, while maintaining plausible deniability to everyone else.

But if Graham think gender studies is more valuable than the things he’s devoted his entire career to, what does that say about his future?

I have a guess. At some point, possibly this decade, possibly the next, Paul Graham will exit Y Combinator (he has, IIRC, stopped handling day-to-day operations but still retains an advisory role). He’ll cash out most of his holdings. And then he’ll publish a groundbreaking work of feminist theory, one which transforms our understanding of gender. Berkeley will hold seminars like “Paul Graham in conversation with Judith Butler,” undergrads will discuss him in their philosophy classes, and the time when everyone called Paul Graham an entitled tech bro will be relegated to a historical footnote.

A more magical world is possible. All you have to do is believe.